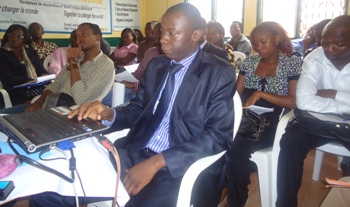 Transparency in the extractive industries in Cameroon: youth engages in debate and prepares for action

On the occasion of the International Youth Day, World Dynamics of Young People (WDYP) organized a seminar about transparency in the extractive industries in Cameroon. This event, which gathered more than 40 young people from different movements, associations and churches, took place on the 12th of August 2011 at the office of WDYP with the support of the Cameroonian Coalition of Publish what you Pay (CCPWYP), the World Bank and RELUFA (Reseau de Lutte contre la Faim).

The reason for the theme of the day was the fact that Cameroon has the vision to be an emerging country with a strong focus on the extractive industry (Vision 2035). But until recently the practises in this sector were surrounded by secrecy and still the majority of the population is not aware of the potential benefits of their natural resources. We especially targeted young people because they are our principal target group and they can take actions now to improve their future and start a positive change.

The day-long seminar aimed to inform the participants about the extractive sector, make them aware of the problems regarding the exploitation of different natural resources and to actively involve them in the process of creating more transparency. The programme consisted of several interventions varying from a presentation about the general problems concerning exploitation, an explanation of what is ‘Extractive Industries Transparency Initiative’ (EITI), an overview of the campaign ‘Publish what you Pay’, a documentary about the dangers of extracting uranium, group work discussing how young people can take concrete actions and developing an end declaration.

Cameroon is one of the richest countries in terms of natural resources in Africa but the population does not benefit accordingly (referred to as the ‘contradiction of abundance’). The main reason given for this unequal distribution of profits is bad governance. In 2007 Cameroon was accepted as an EITI candidate country and has now the status of ‘close to compliant’, which means it fulfils not yet all requirements EITI sets for transparency in the extractive industry. In table the same year the Cameroon Coalition of ‘Publish what you Pay’ (PWYP) was initiated. PWYP strives towards full disclosure of information about revenues and costs related to the extractive industry by governments and companies, as a first step of development beneficial for the Cameroonian population. After each presentation there was the occasion to ask questions and learn from the expertise of the different speakers. Many participants expressed their issues and the fact that the discussions were to be stopped because of the time gave the conviction the theme was interesting and appreciated.

RELUFA projected a documentary about the exploitation of uranium that reveale

d the possible dangers of this type of extraction. It was shocking to for example see the health risks that can last for many decades after a site has already been abandoned. A lack of information towards the local population about possible negative impacts in their environment is an often seen phenomenon.

After the more theoretical part in the beginning of the day, it was time to put the gained knowledge into practice and the participants split up in four groups to discuss in more detail what concrete actions they can take. At the restitution of the group work it became clear that all groups planned to pass the information and knowledge they have gained to other people in their environment, for example by organising awareness raising meetings within their youth groups and associations. To realise the goal of involving more young people in this subject they indicated to need the help of WDYP in the sense of documentation, materials and expertise. The workshop took off by developing an end declaration with the main conclusions of the day, actions the participants engaged themselves to and recommendations towards the government.

In general the participants valued the theme, the content of the presentations, expertise of the speakers and group work and there was a motivating atmosphere to take further actions. The staff of WDYP was also satisfied by the end of the day and surely has the intention to organise an alike activity on the International Youth day in 2012.